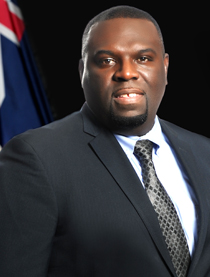 Dwayne “John John” Seymour is a son of the soil, who grew up in Gun Square, central Bodden Town.

Mr. Seymour began working at the age of seven in Bodden. His values of hard work and dedication to the community developed from those early years.

Since then, Mr. Seymour has devoted his life to serving the community, with a particular focus on the islands’ youth. He has been involved with Bodden Town Football Club for some 30 years, as manager, coach, captain and vice president. He also served as deputy chairman on the Bodden Town Heritage Pirates Week committee, He organised and sponsored “Be Loud, Be Proud” to get out the vote in the 2009 campaign, and served as chairman of the youth parliament, for which he historically led the sessions annually for four consecutive years. He also staged the programme for up-and-coming musicians called “Xposure”, to hone the talents of rising stars. In addition, he has enjoyed mentoring students at John Gray High School on Grand Cayman and Layman E. Scott High School on Cayman Brac.

Mr. Seymour has 32 years of experience in the aviation industry, including airline security. He was the Cayman Airways regional and international airport manager, and also served as the project manager for customer service development and training. He is a certified level 5 security trainer and an aviation security consultant, and is IATA certified. Mr. Seymour has been a businessman for the last 17 years.

He has served on a number of boards, including the Prisons Inspection Board, Airport Operators Committee, Security Companies Accreditation Steering Group, Caymanian Status and Permanent Residency Immigration Board, the Health Insurance Commission, and the Chamber of Commerce Expo Board.

This is his second term in office, having been a Member of the Legislative Assembly from to 2009 to 2013, also serving as Minister for Community Affairs, Gender and Housing.

Mr. Seymour is married and has six children. He is a member of the Webster Memorial United Church in Bodden Town. He enjoys sports and world news.