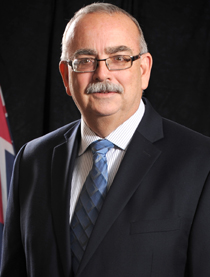 Hon. Minister Roy McTaggart is a former chairman of the Board of Cayman Airways, a member of the Commission for Standards in Public Life and is chairman of the Young Caymanian Leadership Foundation. He has been active in many roles in the community from serving in several posts with the Cayman Islands Chamber of Commerce, including two years as president. He has also been the treasurer of the Church of Christ and enjoys mentoring Caymanian students in need of positive role models. He was also a member of the Board of the Cayman Islands Stock Exchange. Mr. McTaggart joined KPMG in the Cayman Islands in 1985, transferred to their Orlando office in 1986, and returned to the Cayman Islands in 1988. He was admitted to the partnership in 1991, became joint Managing Partner in 2003 and appointed Managing Partner in 2007. He was Managing Director of KMPG in the British Virgin Islands from 2007-2012.

He served as Councillor to the Ministry of Health and served as interim Minister at times from 2013-2017. For the 2017-2021 term he is serving as Minister for Public Finance and Economic Development.