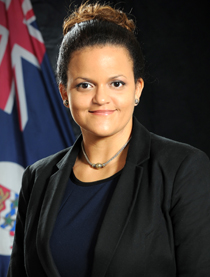 The Honourable Tara Rivers, JP, MLA was first elected to the Legislative Assembly of the Cayman Islands in May 2013. For four years following her election in 2013, Minister Rivers had responsibility for education, employment and gender affairs. Upon her re-election in May 2017, Minister Rivers was given ministerial responsibilities for financial services and home affairs. She is the first woman to hold the position of Minister responsible for Education, Employment, Financial Services and Home Affairs, respectively, in the Cayman Islands. As Minister for Financial Services and Home Affairs, agencies under her remit are the Department of Financial Services Policy and Legislation; General Registry; the Tax Information Authority; Her Majesty’s Cayman Islands Prison Service; Her Majesty’s Fire Service; the Department of Community Rehabilitation; the Department of Public Safety Communications (formerly 911); and Hazard Management Cayman Islands. Minister Rivers also has responsibility for the jurisdiction’s financial services regulator, the Cayman Islands Monetary Authority, as well as the Auditors Oversight Authority and the Cayman Islands Stock Exchange. Since taking up her post in 2017, Minister Rivers has led efforts to engage with local industry, international policy makers in the US, UK, EU and Asia, and other local and international stakeholders on a number of key financial services issues. She regularly engages with UK and EU parliamentarians; and with US Senators and members of the US House of Congress. Minister Rivers has also invests a significant amount of time and energy supporting national security and public safety in the Cayman Islands. Her efforts have resulted in the completion of a number of critical projects thus far, including upgrades to the National Public Safety Communications Radio System; the implementation of enhanced offender supervision and rehabilitation programmes in both the prison and the community; and key amendments to the Disaster Preparedness and Hazard Management Law which strengthen the Cayman Islands resilience to hazards through the legislative establishment of the National Disaster Fund and the launch of Phase I of the National Emergency Notification System. For four years following her election in May 2013, Minister Rivers had responsibility for education, employment and gender affairs. Under her leadership, academic graduation requirements were introduced for all public high schools, along with an honours system promoting excellence. She also successfully steered the development, passage and adoption of the comprehensive overhaul to the Education Law, bringing it in line with the Cayman Islands Constitution; and which has led to the establishment of an independent inspectorate/quality assurance regime for all education establishments in the country. For employment, she piloted the policy and legislation that enacted the first national minimum wage; and she also spearheaded the first substantive review of the National Pensions Law in almost 20 years. For gender affairs, she was the driving force behind the first National Conference on Women in March 2014, and the extension of the UN Convention on the Elimination of All Forms of Discrimination Against Women (CEDAW) in 2016, as well as the production of the documentary ‘Her Story is Our History: the Women’s Suffrage Movement in the Cayman Islands’ in April 2017.Prior to her election, Minister Rivers was a structured finance and corporate lawyer, having practiced law at a preeminent international firm in the city of London (UK) as well as at a leading local law firm in the Cayman Islands. In the late 1990s Minister Rivers was a civil servant, and during such time she was instrumental in the establishment of the first National Youth Policy for the Cayman Islands (2000); and the creation of the Women’s Resource Centre (now the Family Resource Centre). Minister Rivers is a qualified attorney eligible to practice law in multiple jurisdictions. She holds a Bachelor of Arts degree in psychology from Brandeis University in Boston, Mass.; and a law degree from Osgoode Hall Law School, and an MBA from the Schulich School of Business, both at York University in Toronto, Canada.Minister Rivers’ civic activities have included Cayman Against Substance Abuse, the Cayman Islands Branch of the British Red Cross, Cayman National Cultural Foundation, and the West Bay District Heritage Committee. A past chairperson of the United World Colleges (Cayman Islands) National Foundation, Minister Rivers was one of the youngest recipients of the United World College scholarship at age 15.